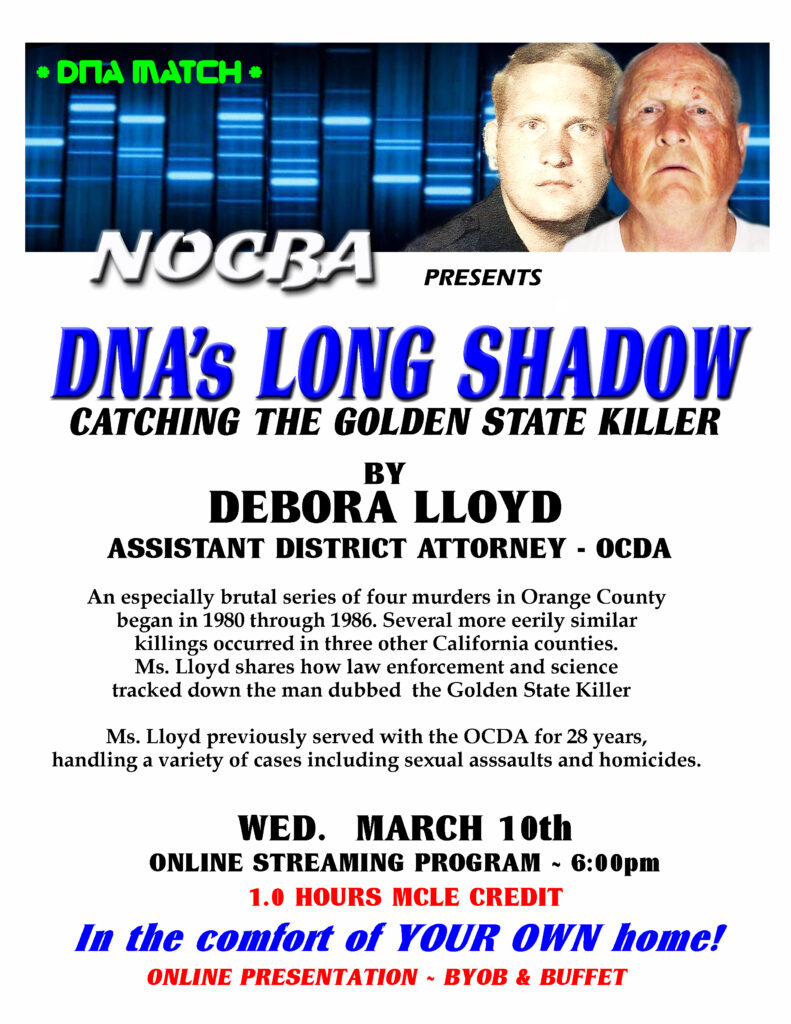 An especially brutal series of 4 murders in Orange County began in 1980 through 1986.  Several more eerily similar killings occurred in three other California counties.

ADA Debora Lloyd had served with the OCDA for 28 years, handling sexual assault and homicide cases, before taking charge of the fledging DNA unit.

Seven years into her retirement, ADA Lloyd was called back to apply her DNA expertise to track down the man dubbed the Golden State Killer.

Joining us also that evening will be sitting Orange County District Attorney, Todd Spitzer. who will introduce ADA Lloyd and Judge Rogan who will present a brief State of NJC.

1.0 MCLE Credit will be available to NOCBA members in good standing.

Certificates will be sent via email following the meeting.

Attorney Debora Lloyd has been a prosecutor with the Orange County District Attorney’s Office for 28 years.

In that time, ADA Lloyd worked Juvenile court, misdemeanors, felony panel, and preliminary hearings, before transferring to the Sexual Assault Unit for 3 years. Nine years in the Homicide Unit followed, as did assignments as Assistant D.A. Head of Court for South Court and Assistant D.A. in charge of the then (D.N.A. Unit), now Science and Technology Unit, which she headed until her retirement four years later.

But her retirement was cut short, and she was asked to come back to work to lead the Orange County District Attorney task force for the Golden State Killer Case, a position she remained in until he was captured two years later. ADA Lloyd served as one of the trial prosecutors on the case until it’s completion in late August, 2020.

ADA Lloyd is the first woman to ever win the Prosecutor of the Year for the State of California. And she is credited with obtaining the first Death Penalty for a Hate Crime in California.